Want to come up and see my sketchings?

After I finished the boucle top my studio was a disaster, despite picking up every day when I am done. I took a whole day to recover from the boucle episode but just kept going, and going, and going,,,,,,,,,,3 days later my whole den of  Sewing Zen was reorganized and I was happy. Once again, I knew where everything was and now it was time to move forward. 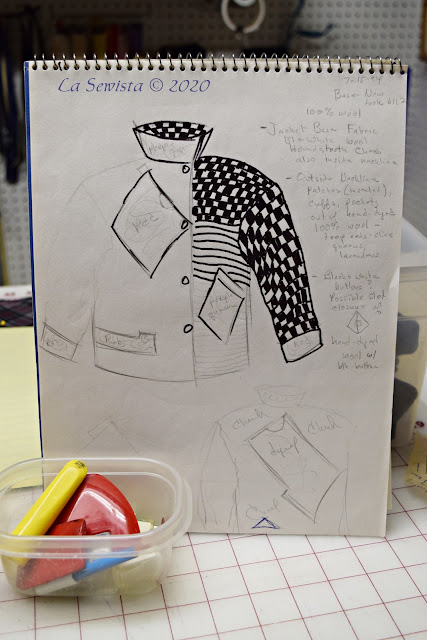 In my cleaning I discovered a sketch pad I really thought was blank. I opened it to find all sorts of drawings I did back in the late 80s and 90s. It was really fun to review them. There was a lot of patchwork, fringe, just all sorts of over the top surface embellishment. I still like them today but would probably tone them down a tad, a big tad! Those were the days of 60-80 hour work weeks and if I couldn't make my ideas in fabric, at least I could draw them out on paper. After going down memory lane, I  took a pledge to start sketching again. These days I seem to go from brain directly to fabric cutting. Back then I enjoyed putting what was in my head down on paper first. Then,  when I did have time to shop and sew, reviewing my pad was like reaching into a toy box and deciding what special toy I would play with  that day. I am definitely going to sketch more. 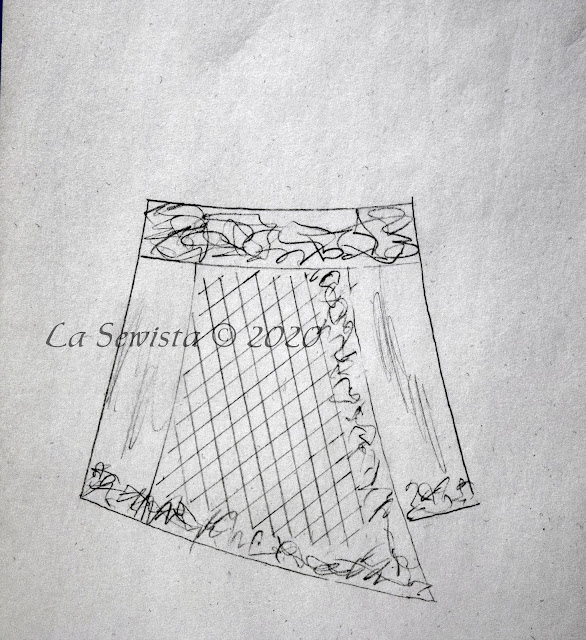 This is the blanket skirt I am working on. It is Simplicity 2655.  It has 6 gores and a deep waist yoke that goes from upper hip to high waist, at least it will when I am done with it. I am using View E, bottom left. 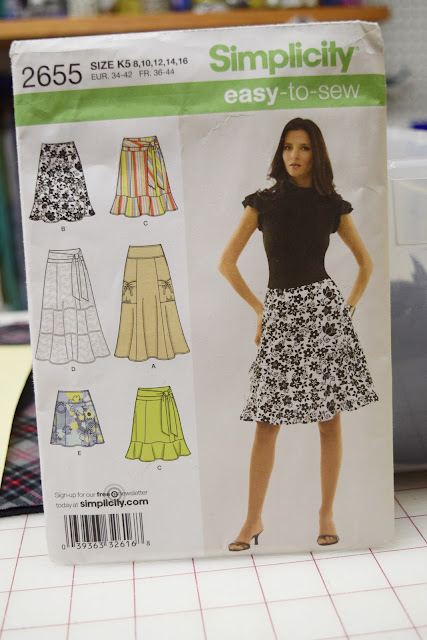 It is SHORT but will be worn with my fleece leggings and boots, hopefully a good look.  The center front gore  will be quilted with diagonal blocks. There will be a border of just meandering scrolls sort of  around all of  the hem. My own input is making it a wraparound skirt and doing the center front panel asymmetrical.  The pattern uses a zipper. 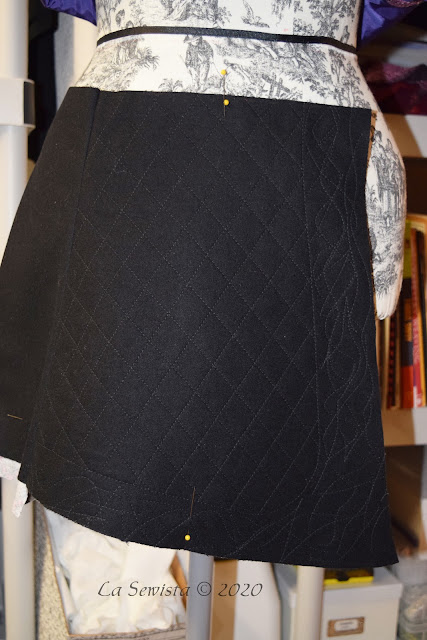 It will be  underlined with cotton flannel. This little skirt needs to provide some warmth! This blanket skirt is  a bit of an oxymoron with its short length and cashmere/flannel fibers. Their primary function,however, is to allow the decent wearing of leggings without exposing our divine lady bits to the entire world. I think it's a great concept and have seen many in our climate wearing these.  Some look like short little "puffer" versions and others look like short little heavy sweaters. Many are just heavy fabric skirts, like this will be. 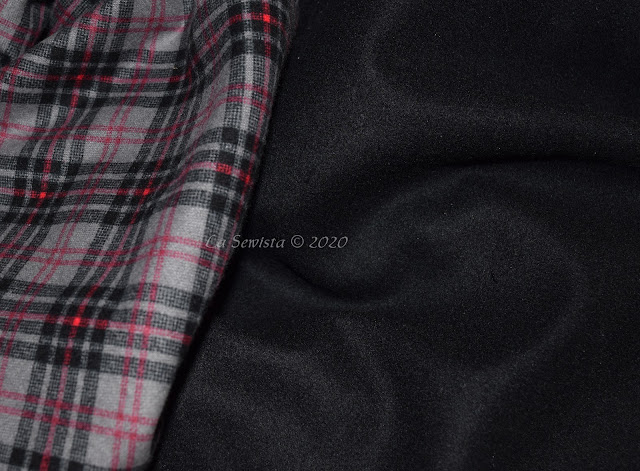 I really lucked out here with the fabric. In my organizing frenzy, I found a BIG piece of black cashmere that was left over from making my cashmere coat a few seasons back. You can just see the glow. It is so yummy.  Score!  I had no idea I had this big piece of cashmere hanging around. The underlining is 100% cotton flannel, the better to keep my booty warm.  It's going together pretty quickly so hopefully I will have more for you soon   We have a lot planned this weekend and I was hoping to wear it but won't happen. I want to savor the process. Everything on this should be easy. 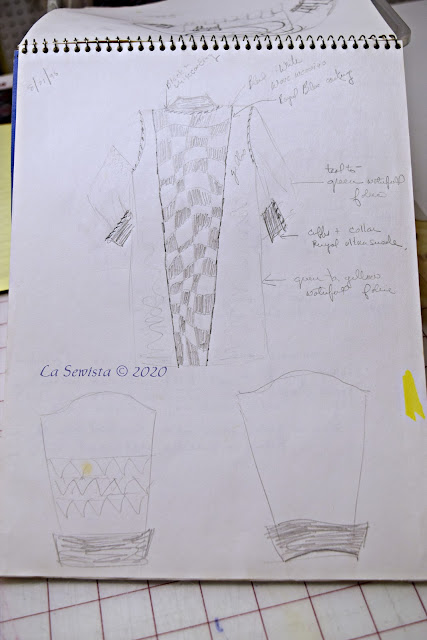 I've gotten a big positive bunch of compliments on the Vogue top. Thank you to all for your kind thoughts. It was a challenge but that was a lot of my own making do to my choice to not follow the pattern as written. But isn't that what patterns are about? Inspiration and guidance? Heck, this blanket skirt isn't going to be like the Simplicity pattern either! .......Bunny
P.S. Did you catch the date on the sketch below? Upper left. 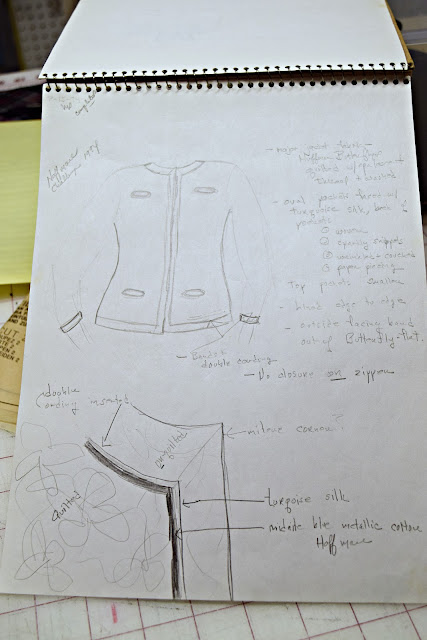 For the Love of Challis!

Moving onward and upward from that last garment!!! Who doesn't love a good challis? We put up with it's incredible ability... 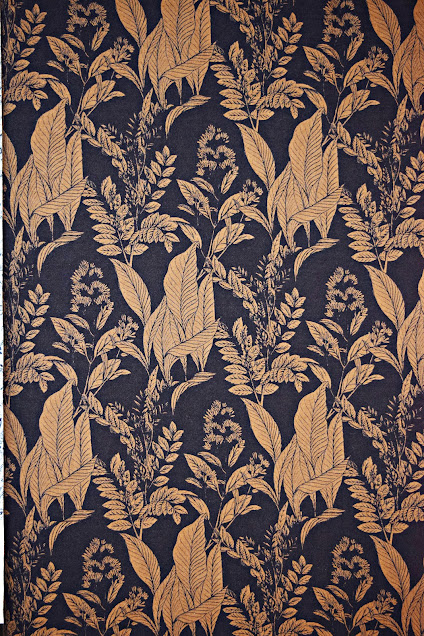