The Sheer Blouse or "¿Estoy Boriqua?" 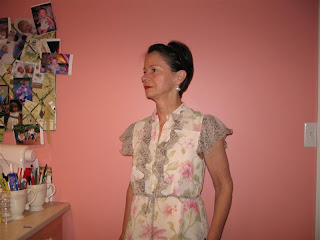 As soon as I got this blouse finished and on for photos all I could think of was, "Man, I am ready for a block party in Rio Piedras, Puerto Rico." I mostly love the blouse. DH definitely loves it and says it looks "Boriqua" as well. And that's great! It's a light, fluffy, summery blouse that I don't take too seriously, despite all the handwork in it and dealing with sheer issues.

This is a combo of BWOF 06-2009-122 and 123 and a fair amount of my own design changes. The directions from Burda? SUCK. I had to do my own thing every step of the way. The only time I referenced the directions was on the CF bands. They were useless. If you can figure out their directions, let me know. Somehow, on my own, I got thru it. That band alone takes it out of the dot and a half category.

The fabrics are sheer poly chiffons for the shell and sleeves/ruffle and a poly georgette for the lining.

Design changes I made: 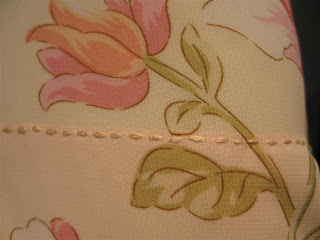 * I used a sheer which necessitated French seams everywhere as well as a lining. The lining is attached at the CF bands and the armscyes. The selvedge of the lining is used across the upper chest and back giving the illusion of a sheer yoke above. To support this I did a running stitch across the selvedge in 3 strands of complimentary colored floss. The lining hangs free otherwise in the garment. All ruffle, sleeve, and hem edges were treated with the edge treatment shown in this tute. 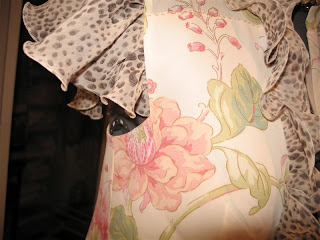 * I changed the sleeve. After making a muslin with the BWOF sleeve variation, I decided it looked, well, as per Gwen, like a handkerchief sewn on, fugly. I played with a muslin ruffle and ended up doing a 6 inch bias cut ruffle for the sleeve. I used double the width of the upper armscye and tapered the width down to nothing at the ends. I thought it was pretty flattering for these aging arms. I also had to figure out how to deal with the bottom of the armscye. It is square, parallel to the floor, with sharp corners. First I dealt with that bottom edge. I used a double fold of bias to trim it off. The ends were folded in so no raw fabric hanging around. (Click to enlarge the pic to see this and sorry for the poor lighting. ) 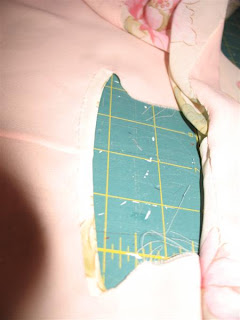 You can see the remaining raw edges of the armscye. The ruffled sleeve was attached to these edges with a French seam. The finished edges of the bias binding and the edge of the sleeve french seam were then sewn together in the corner making a smooth transition on the interior.

* I guess you could say the CF band was my own design because I don't have a clue how BWOF put their's on. I was really pleased with the tiny buttonholes made by my 38 year old Kenmore. My Pfaff did not pass this test. The buttons I used needed to be flat and tiny, so I found just what I needed in my stash. They were MOP inherited from my great aunt, so a nice antique touch here. 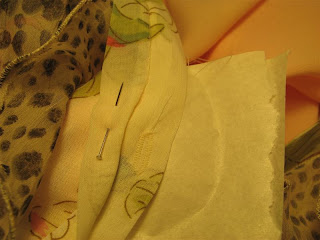 I used two sheets of stabilizer underneath the buttonholes. This is one of those applications where the extra fine thread really makes a difference.


My recommendations for anyone using this sheer fabric:

* Use a small stitch. Throughout this construction I used a 1.5 stitch length. This is critical for the French seams, particularly. These sheer fabrics love to shred and this will help prevent that.

* Think out every seam and cross seam before you stitch it. You will see everything thru the fashion fabric. French seams can be bulky at intersections and you need to plan for that. Plan for a lot of handstitching to make things work.

* Old fashioned bottled liquid starch will be your new best friend. Every seam got starched before pressing as I worked thru this project. It helps manage the unruliness of the fabric and cut down on ravelling. As always, do some test starching and pressing before committing to your project.

* Keep things light. Sheers are all about the light passing thru, the floaty nature of the drape, and downright femininity. Don't get to heavy handed with your design. That will put you back in "hippie from the sixties" mode. If you lived thru it, like I did, it won't look good on you at this stage, trust me.

As far as fit, I love the fit from the waist seam to the hip and in the upper bodice. The waist to boob area is different. I took in the sides seams at least an inch each. It still seams to "blouson" above the waist seam, giving the SBS (saggy boob syndrome) look. They were perky when I took the pic, really. You don't see the bottom hem edge of the blouse either in the picture. I have lost weight lately and all my clothes are hanging off my hips with the crotch line dropping a good couple of inches. I am not sure I am up to making those adjustments in jeans. Actually, I know I am not. So this did not pose a pretty pants picture with the blouse, no matter what pants I tried. Time to buy more fabric.

I know I have been somewhat MIA. I mentioned previously some heavy work commitments and DH and I are thru that now. But last last Monday my brother's oldest son took his life. We have been reeling ever since. My heart goes out to anyone who has lived thru such a horror.

I must say that Tommy was a beautiful young man whose troubles came as a surprise to all. He was close to family, communicated exceptionally, had many friends, and worked hard at two jobs. As one of my dear cybersewing sisters, Ann, said to me, "he didn't mean to kill himself. He just wanted the pain to go away." We may never know the reasons for such a horror. All I know is that there is a chasm in our hearts that just can't be filled. He belongs in there.......Bunny
at July 12, 2009

Being home combined with a brand new 4k ultra HD TV with what seems like 3000 channels has me watching a lot of sewing on Youtube a... 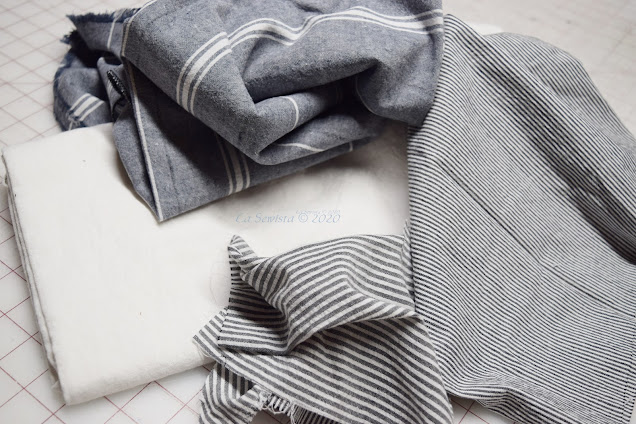