The Speedweave, my new toy! 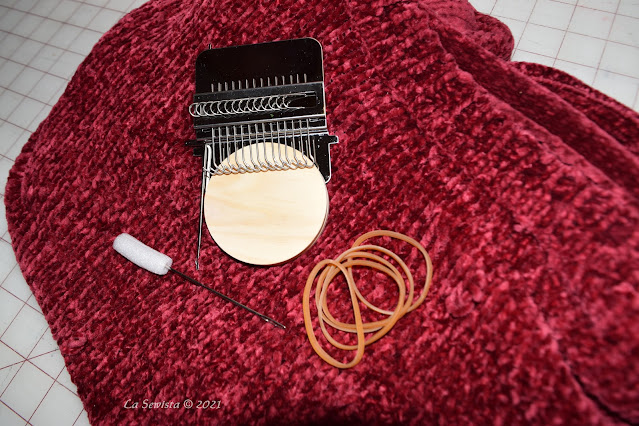 Allow me to introduce you to my new toy: the Speedweave. I have wanted one of of these for quite some time but found them particularly expensive for what they seemed to be. I first discovered them about 3 years ago. And what on earth are they, you ask?

This is a tool that enables you to weave small bits of weaving. It's genius is that it hooks up tightly to an article of clothing,  like a sock or sweater, and you can weave right over the hole that has made its home in that garment. Below you can see it hooked up to my husband's treasured heavy wool sweater that he has worn a hole in during 25 years of wear. Like most men, he does not want to give up a favorite garment and it has sat patiently folded in his closet for years waiting for me to fix it. I never really knew how. I don't knit and it just was beyond my skill set to make a repair that would like good. Enter the Speedweave. 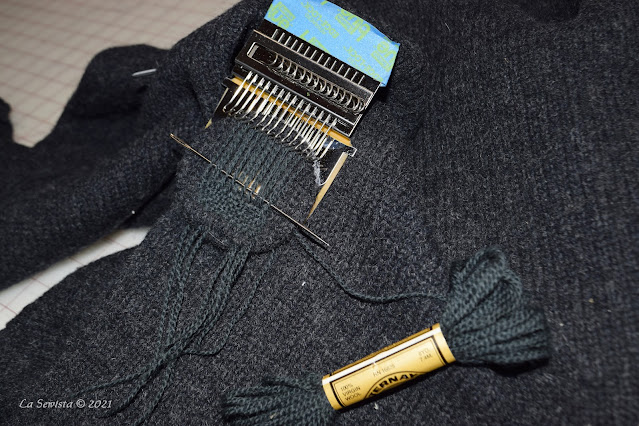 Why did I wait 3 years to get this little treasure? Well, they were pricey. They smallest size was running about 69 dollars and  were made in the Ukraine. I wasn't particularly comfortable sending my credit card to the Ukraine and I thought the price was awfully high. There were purveyors in Britain selling vintage models from the UK at the same price. I just wasn't sure. Every now and then I would look up the Speedweave, same pricing, same issues. A couple of weeks ago I gave it another try. The price was down drasticly and and I bit. I could get a made in China version and a few days later it was on my doorstep. Yay! 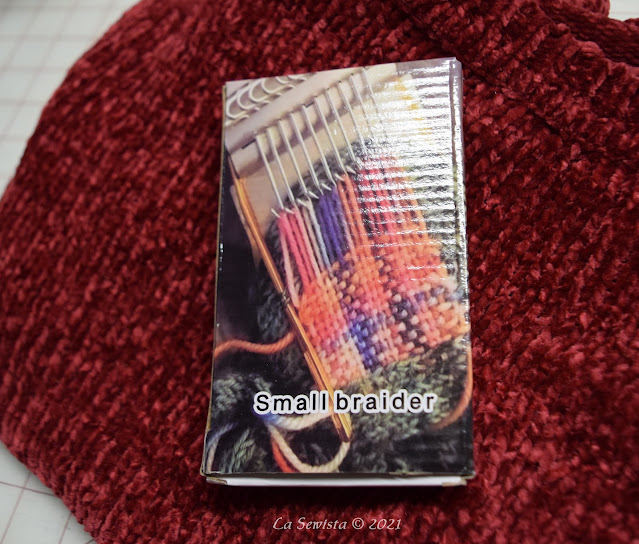 It wasn't impressive upon arrival. It was in a small box, loaded with English misspellings and poor grammar but I figured it out. This one cost me 13.99 instead of 69.00. It was quite easy to figure out how it worked and there were scads of videos on youtube,  listed under "Speedweave",  so there were no issues learning how to use this little wonder.

Based on what I read in reviews I got the  14 needle version.  Many regretted starting with the big large version as they realized it was too big to get into a lot of tight spaces to reweave small holes and they wished they had purchased the 14 needle size instead.  Others purchased the 12 needle, obviously even smaller, and felt they should have gone bigger. I think the 14 needle is just right.

If you look back at my husband's sweater pic with the little loom attached you will see that the top of the weaving, the bottom of the needles,  is way above the hole.  This was my first mistake. I was later weaving over perfectly fine knitting and you really don't want to do that. I lost patience and took out the weaving early rather than go all the way to the top and that made for more fussing at the top edge to make it all look well finished. I failed on that but it's all a learning curve. So the first thing I learned is to line up your hole just below the bottom of the needles.

Other than that it went pretty well. It is quite quick. Like any loom you first warp your tiny loom and then weave your weft threads through. I used Paternayan yarn, 100% wool like the sweater, and this was the closest match I could get on this heathery knit. Hubs was pleased and thought it just perfect. When I first showed it to him he couldn't find the patch. That was all I needed.

When all the weaving is complete, the patch is gently slipped off and the loom disconnected. You then pull the weft and warp threads neatly to the back, weave them here and there and secure.  You see the blue tape on the loom? I found the edges of the metal at the top of the loom very sharp. I covered them with painter's tape to avoid cutting myself. 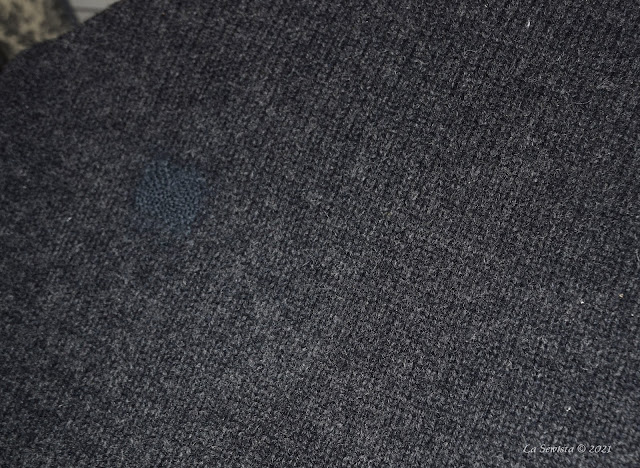 You can use any sort of thread or yarn you like for your tiny weaving. You can get very creative with bright colors and patterns. You can weave over denim, sweaters, you name it, just try to match thread weights for the best results.  My goal here was to just get through my first attempt and to be as unobtrusive as possible. The camera and its flash are making it show up a bit more than it does in real life but in the end I think it looks pretty good, at least good for a sweater he puts on under his heavy hoodie to go out and blow snow when the temps are blowing in the teens. He is Very happy with his patch. He has waited years for it.

I think this little addition to my toolbox will really come in handy. I've already found an afghan and another one of his sweaters to play with . Such fun,,,,,,,, Bunny

So much has been going on in the studio the past couple weeks.  I've gotten on the post holiday declutter/re-org bandwagon in my sewing ... 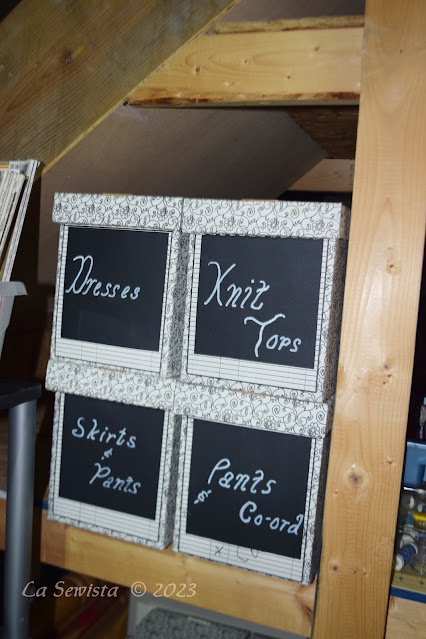