My design decisions on Simplicity 2912 required piping on inside corners and curves. I handled both with a Madeira hem treatment which I go into on this tute. Thanks to my sewing friend Lainey, and a great discussion on mitering piping on the Everythingsewing board, I was able to do a better job than I did on Sophie's Toile Dress. On that dress the neckline had inside corners and outer curves. I used one length of piping. This is not an uncommon way to do this but I have since found a better way, thanks to Lainey. Also, the hem band was shaped and I wanted a really smooth treatment on that curve. 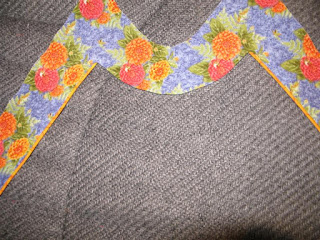 On this dress the facing is stitched right side to wrong side of bodice then turned, giving the dress a nice edge finish and no facings inside, gottaluvit.
I did the Madeira treatment which gave me a really smooth curve and turn to the facing. Per Lainey, I installed the piping in segments. Wonder tape was placed on the piping strip and the piping was then placed on the facing sides. 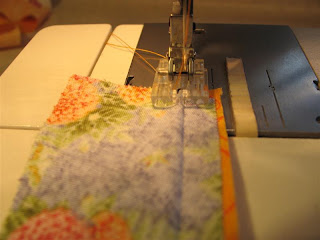 The folded under facing edge is then flipped open and placed under the middle slot of the pintuck foot. On my Pfaff, this aligns the right hand side of the tunnel with the needle postion. I run that stitching line down the pressed and folded line and sew. 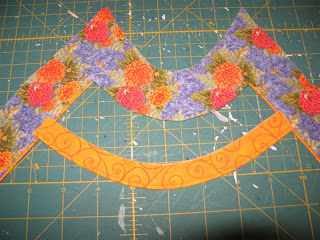 Next is the curved top piece of the facing. The piping is cut and steamed at the ironing board. It is then placed on the facing with the Wonder Tape as you did the previous side pieces. Remove any excess piping cord from the seam allowance areas on all the segments. Flip open the edge and stitch like you did the the side pieces. Once this segment is stitched in, turn the facing and stitch diagonally across the juncture of the two pipings and trim back to eliminate bulk in the corner. 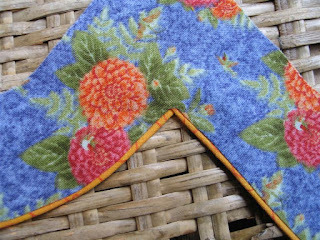 
Next is the hem band. This skirt is circular and the hemband is a facing turned to the front just like the bodice facing. I did the Madeira treatment on the hem to achieve that nice shaped upper edge. However this was far too much yardage to use my prescious Wonder Tape on. 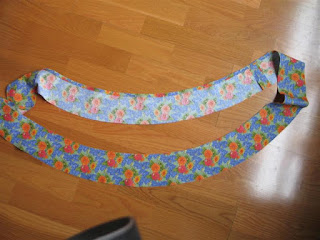 What I did was place the piping down on the machine bed with the cording to the left. Then I opened up the folded edge and lined it up with the stitching line on the piping. Again it was placed under the 5 space pin tuck foot as previously with the right side of the tunnel laying in the crease. Again, check your machine for proper alignment as it could differ from mine. Stitch away. 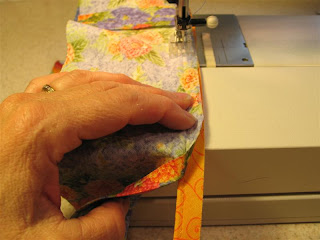 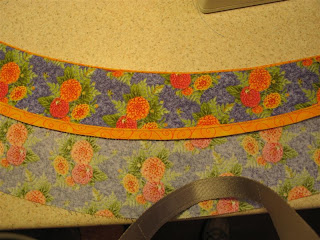 Sorry about the camera strap. Sometimes I don't see the forest for the trees!

Now at this point I could have hand stitched all 94 inches of the hem band but chose not do do so for speeds sake on this dress. As we say in the heirloom world, if you can't see it on a galloping horse........ and I know Sophie will wear this in birthday party, play situations, so I chose to machine finish the hem band. Change to your edge stitching foot. I like this because the blade runs right down the ditch between the piping and the band. I chose not to ditch stitch as I found it would still show stitching to some extent . I felt a well done topstitch would look better. I ran the blade down the piping and quickly topstitched the hem with a 2.0 stitch. My opinion is the smaller the garment, the smaller the topstitching. A traditionally large topstitch would not have looked right IMO. 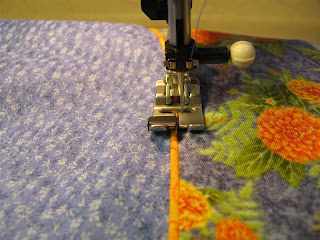 And now the hem is completely attached with the piping in a smooth shape. I love how the piping adds some stiffness and therefore increases the twirl factor, critical to the enjoyment of the garment by any little girl. 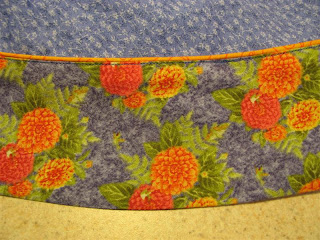 A parting shot here, as I was looking for a belt buckle for my trench, no luck...... 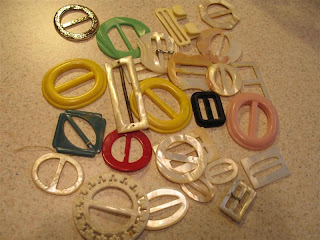 These were part of that wonderful inheritance from my packrat great aunt who passed away 30 years ago in her mid 90's.
at May 12, 2009

It has recently become pretty obvious that I could use some serious batch making of undies. That got me thinking a lot about the process, ... 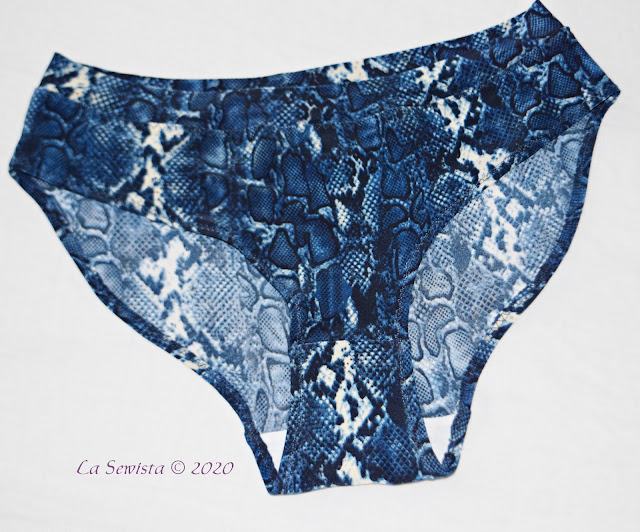